Leaving camp, I was beginning to paddle and Jim told me to quit, as he had the motor in the water and running!  I had no idea...it was so quiet.  What luxury!
Soon, I spotted a "white rock" that upon approach, got up and swam about! 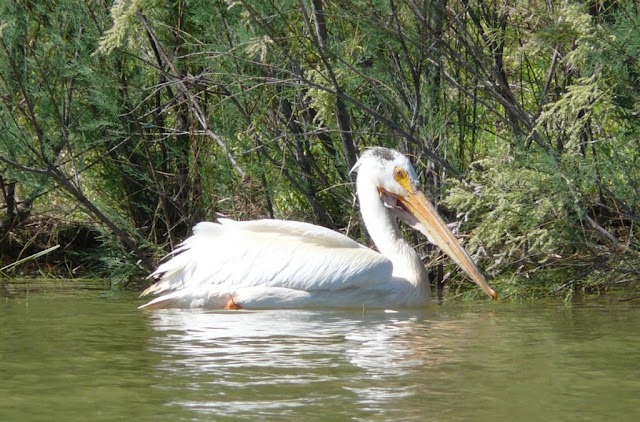 A bit further, we spotted a pelican rookery. Birds flew about in the salt cedar and willows lining the shore. 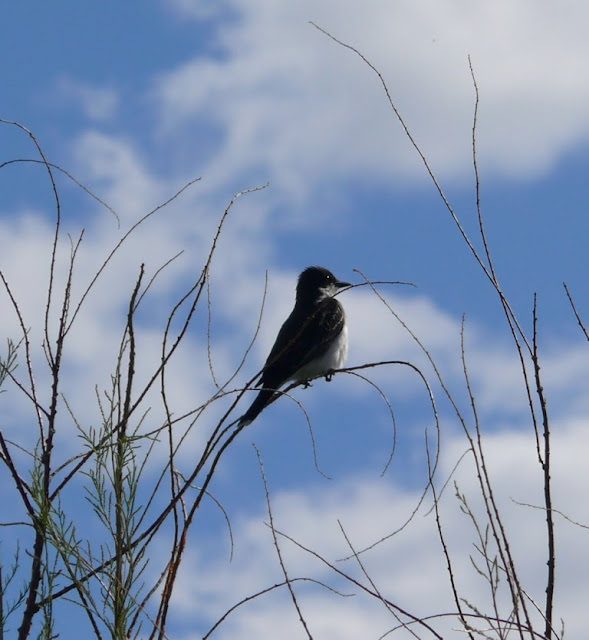 Detritus hanging from the bushes was indicative of past raging floodwaters. 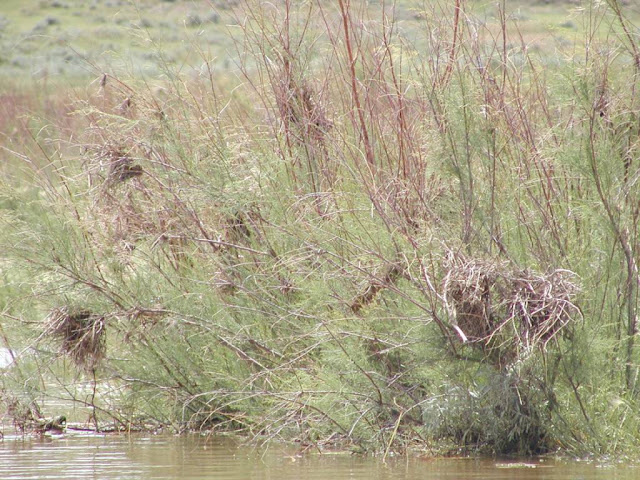 We happened upon a gaggle of geese.  They immediately split and tried to evade us. 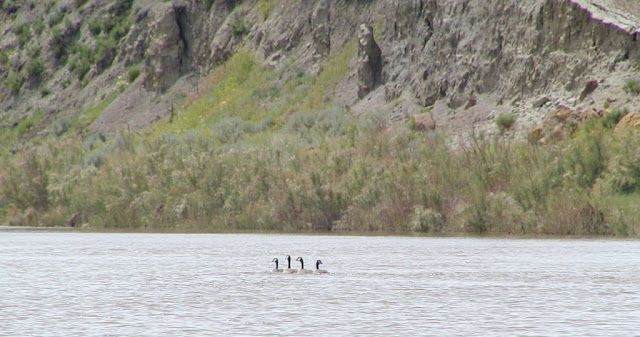 The closer we got, the more nervous they appeared.    Some would dive to escape our approach. 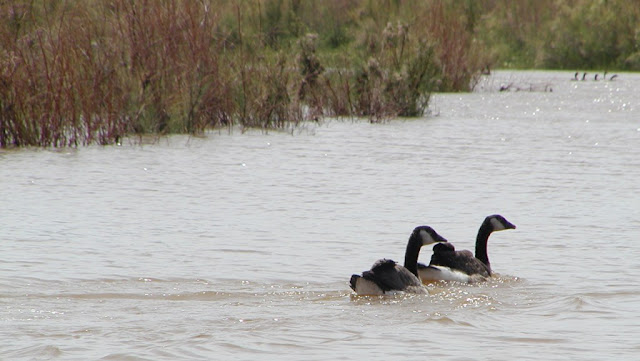 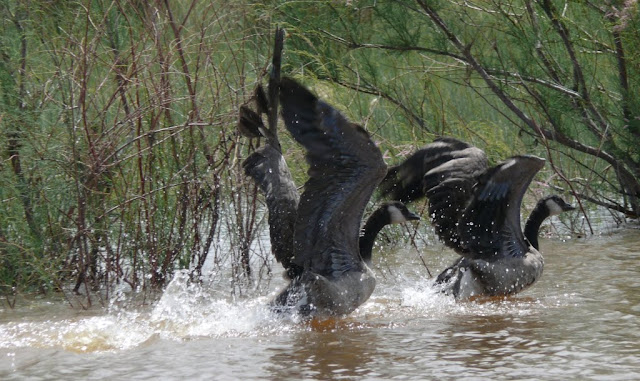 This goose wears a look of surprise! 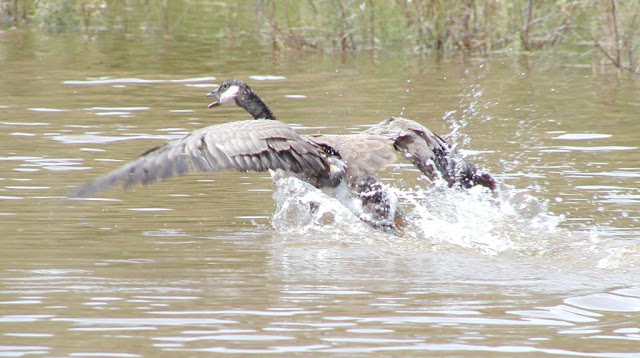 Just when we thought all geese had either flown or dived under to avoid us, I spotted movement on the hillside.  Some of the geese had gotten out of the water and were climbing the cutbank to safety! 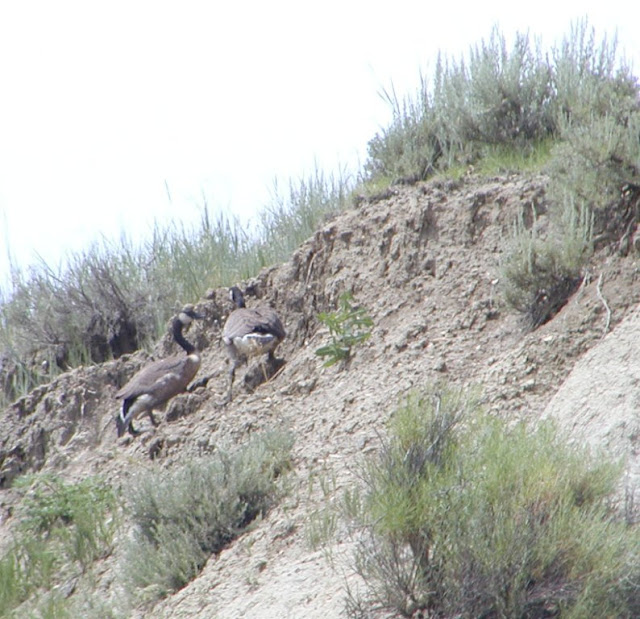 We watched in amazement as they used their beaks and wings to haul themselves up and over the steep embankment. 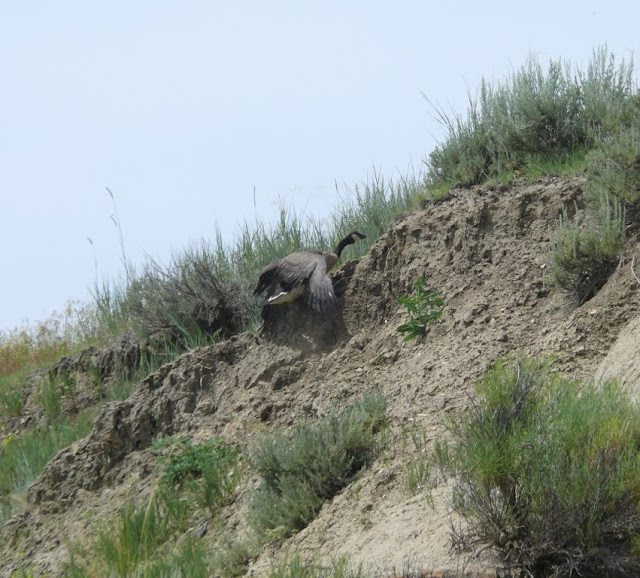 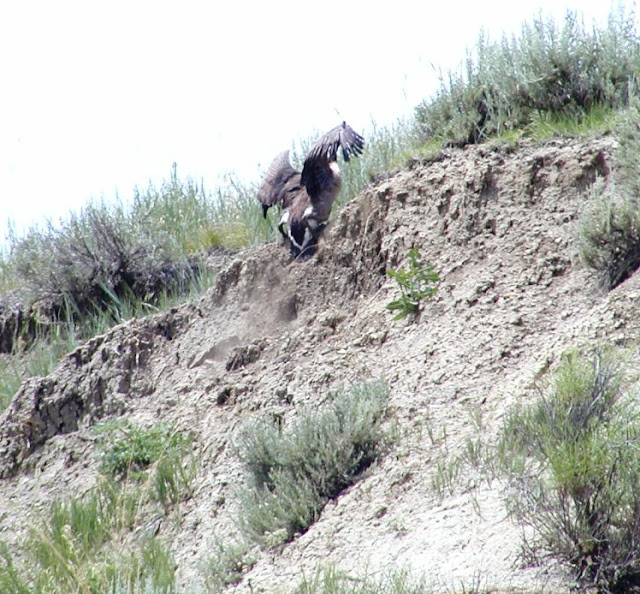 Once on top, they slunk through the grass, still in stealth mode!~ 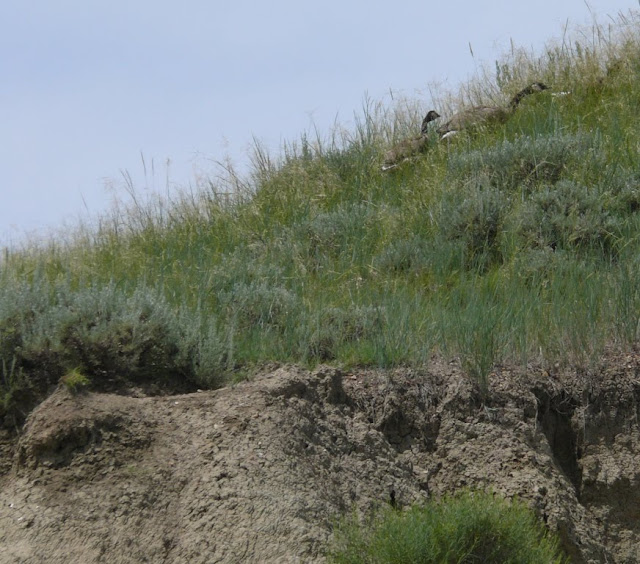 What a sight to see!

Rugged beauty surrounded us as we continued back, into the badlands.

The creek narrowed as we progressed and soft blossoms clung to the partially submerged salt cedar bushes. 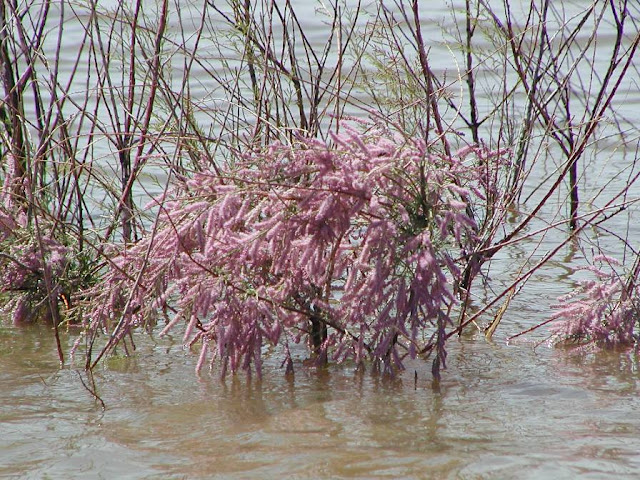 A skull watches over the waterway from it's perch on a post. 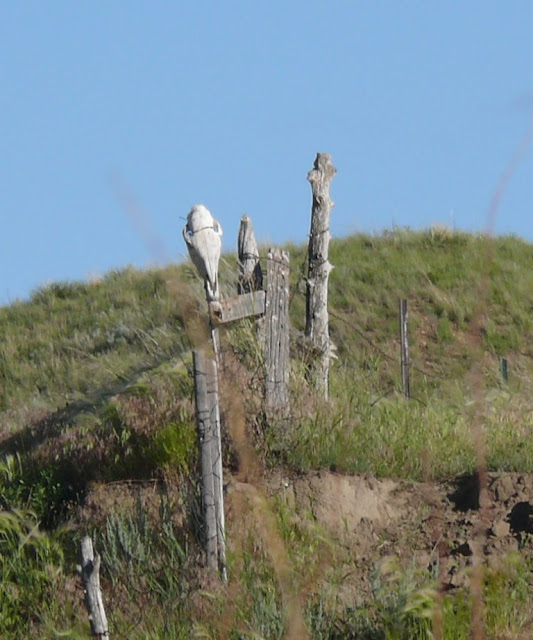 I had decided early in the day that there would be no going back.  Now, instead of paddling my tail off, I was resting comfortably watching the world go by. 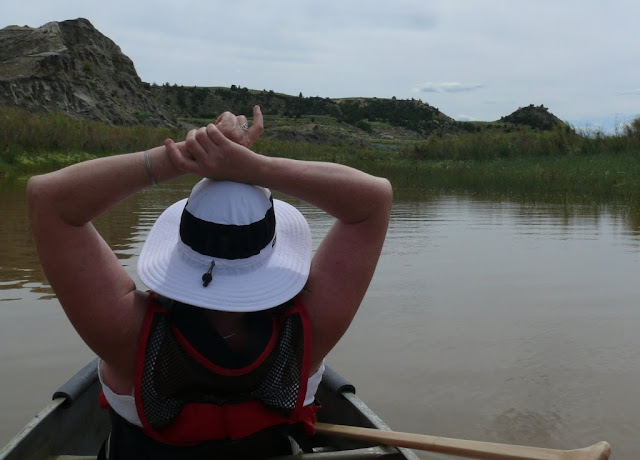 The water was calm and still allowing this reflection. 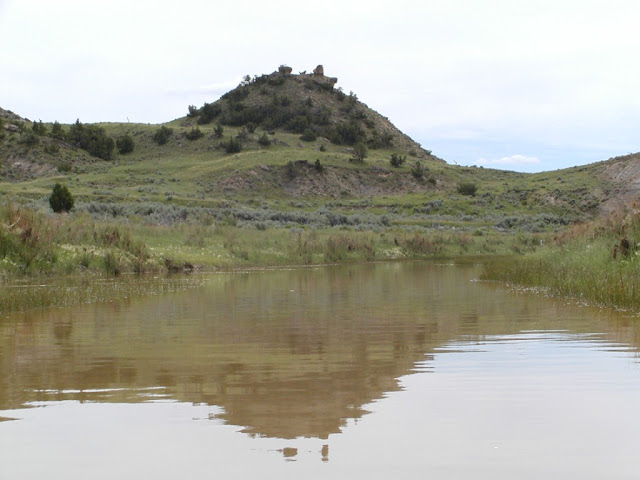 This old place is situated in a remote yet stunning locale. 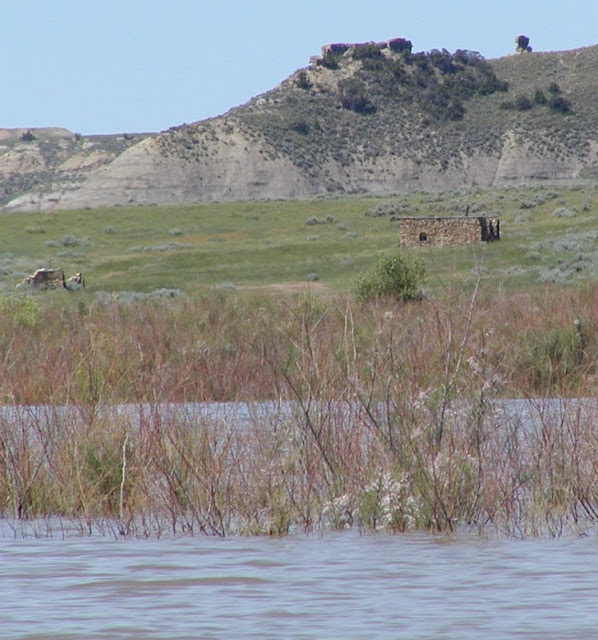 The country has never been so beautiful! 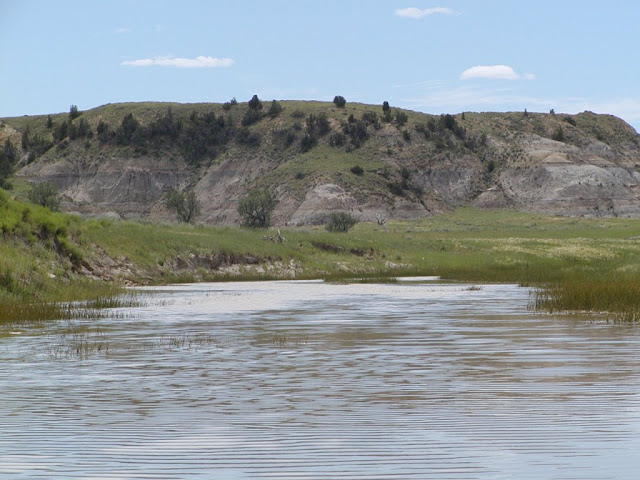 Realizing that we must be near the confluence of the two creeks, we remained watchful.
After a time, we spotted this scoop of pelicans, resting on a shallow gravel bar at the mouth of Timber creek. 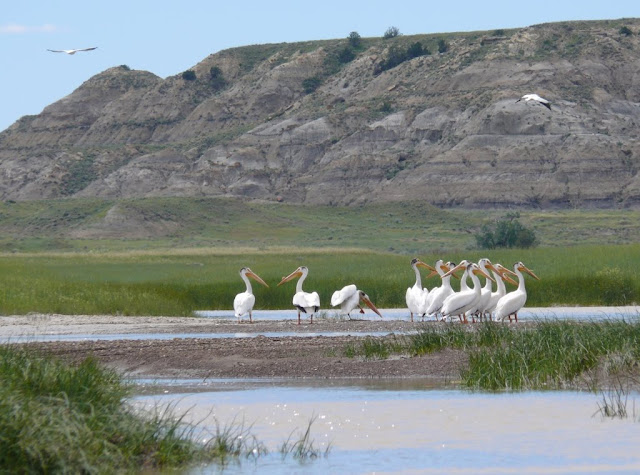 The small creek was running quite a stream of water, making paddling upstream quite difficult.
After eyeing us for a bit, the squadron of birds took flight. 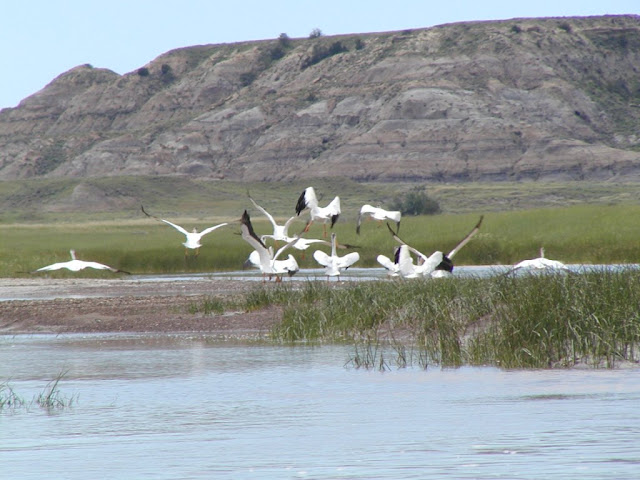