Some of you know that a major undertaking is ongoing to repair the Fort Peck Dam Spillway.  If I have this right, when the historic releases coursed over the concrete spillway, it caused the concrete spillway to "buck", and erode from below.  The sheer force of the releases scoured out a pool at the bottom of the raceway and also eroded the flanking earthen banks.  Now, repairs are underway.

According to signage, spillway gates will be worked on.  Here, the lake laps against the gates.

You can see a diagonal line across the spillway, channeling the Dam's gate leakage toward the eastern edge.   Work is underway along the Western edge.

Here is what the dam is all about (mostly).

The Missouri River, downstream from the dam.

One sign of three, at the Dam, indicating what is being done and by whom.

At the bottom of the raceway, west of the plunge pool, a huge fill is underway.

This damage at the bottom of the raceway is likely part of why repairs are underway.

Here, you can see both sides, crumbling a bit.  Note the leakage is running only on the eastern edge.

The view from Tower Hill.  You can see a gate, blocking the road to the plunge pool while construction is underway. 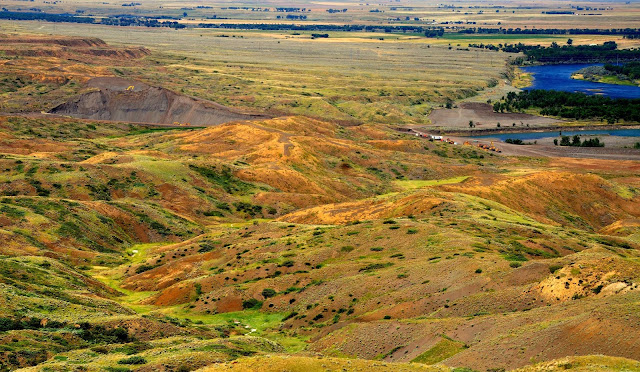 A tiny excavator on the heavily eroded western bank and the same very large fill below it as well as where the spillway released meet the Missouri River.  On the Eastern shore is also heavy equipment, moving earth.

Back in the day, people would haul their garbage to the banks of rivers or streams or coulees and dump it.  This has been there awhile.  Like Woodsy Owl says, "Give a hoot, don't pollute!"

Is there a fungus amongus?  I'm not sure what this is but it's pretty!  Tiger fungus? 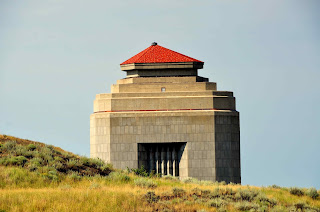 Black hat.  (They are similar but so VERY different.)