Since so many of you have asked what exactly I was doing in the mountains I decided to respond to you all at once.    I was in the oilfield when I lived/worked in Augusta.  We had a running joke then:  Don't tell my mother I work in the oilfield, she thinks I play piano in a whorehouse!

Seriously though, one of my jobs was to compass line.  I carried a compass and would start from a known point, such as a bench mark or a stake that we had set with turns from the benchmark.  I carried a heavy back pack loaded  with  food, water and rolls of plastic orange flagging.   I also wore a belt made of a length of duck tape stuck back on itself with rolls of flagging circling my waist.

Being a smoker back then, I always had a source of fire and I also carried a hammock (for afternoon naps when required) and a nylon rain poncho that converted to a tent.   By the end of the day, I'd have no food, water or flagging so my pack would be pretty light.  I always wore a hooded sweatshirt, bandanna over my long braided hair and a baseball cap and hiking boots.  That was my summer "uniform".

I carried a topographical map and since I was the last to be dropped on the mountain every day the pilots and I would fly the line to see what I had in store for me and also to look for possible LZ's (landing zones) for pickup at the end of the day.

I had an Irish setter back then, whom I named "Dawg".  I acquired him in Cortez, Colorado when he magically appeared in my motel room, sat in front of me and offered me his paw!  Strangely, I found the setter Dawg's owner had lost and Dawg was given to me.  I hauled him with me for years and he went with me even in the helicopter.  I'd open the door and he was in and down on the floor before I knew what happened.  He never lifted his head until we neared the ground and then he'd rise and be ready to disembark.  Even when we got picked up in high winds on a steep slope, Dawg was never a problem...I'd open the door to the ship and he'd be in before I could step onto the skids!    I am amazed by this, looking back.   Amazed that the pilots allowed me to bring him for one and also amazed that he didn't draw a crabby grizzly to me but again, thankful!

I remember the day that I learned how to board a helicopter that was towing in.  Approach diagonally from below (to avoid having your head removed by a rotor) and wait until you got the "nod" from the pilot.  Once you got the nod, open the door, step on the skid and grab the seat belt.  If you failed any of these steps, chances are the ship would lift off without you.  Even if you were on the skid, holding onto the seat belt, chances were strong that the ship would lift off before you were inside - thus the reason to hold onto the seat belt!  I ended up climbing into an airborne ship many times.  And this airborne helicopter was ALWAYS turned downhill and moving fast.  Talk about THRILLING!  Sometimes the pilots would make others walk up or down hill to a flat LZ, perhaps not trusting that they would or could participate safely in a tow in pick up.  (Again, thank you helicopter pilots....!!!!)

So.....I would start laying out the seismic line with my compass and rolls of flagging.  All day, every day...I'd hike the mountains with my dog, striking line for the chain crew to follow.  If I got too far ahead,I'd get dropped off with the chain crew for a day or two, sometimes sketching the line map for drillers or chopping brush with a machete for the survey crew who would be soon following.  If I had an entire line laid out, I'd work with the survey crew and pack the instrument for the surveyor,  keep notes,

During the course of my career, I ran the front and rear equipment crews, powder crew (setting charges), reclamation crew and  was also a trouble shooter for the Observer, who was in charge of the entire process, second in command only to the party manager.  Although now antiquated, I still have my shorting plug and com box from my days as trouble shooter, a job I loved.  After we'd lay out the cable and geophones, the Observer would look for problems with the line, electronically.  He'd send me to help identify and fix any poor connections, shorts, broken wires, etc and I'd have to carry equipment with me in case I had to replace a length of cable or a string of "phones".   The shorting plug would stop the flow of current, allowing the observer to pinpoint problems and the com box could be plugged into the line and with the push of a button I could communicate with the Observer in the dog house over the line.   I always put on many more miles than anyone else and was absolutely fit back then.  I recall seeing elevations well over 10,000 feet on the maps as we climbed and at those elevations, would stop to breathe periodically on our ascents.  Of course once at the top the first thing we'd do is smoke!

I was assigned reclamation when we were on forest service land out of Augusta.  Part of my responsibilities were to work with the drill crew whose portable drill rigs were hauled by helicopter from shot point to shot point.  The forest service inspector was a hard nose young woman who made my life  hell!  I did not push her from a cliff although the thought of doing so brought me peace as I carried a tape measure with me to ensure that the cap wire was the required distance down the hole and buried in the shot hole the proper number of inches of pea gravel.  I also was required to load any evidence of drill mud into drums with a shovel (try this at home....stuff is slick as snot and clings!)   And if she found ONE shred of flagging or a cigarette butt  after the line was cleared, we would be fined.  I learned then, that you can't fight city hall and I didn't mind keeping the forest pure and lovely.  What I did mind was the inflexibility I encountered from the inspector and her attitude toward us.

My favorite pilot was a guy named Tom, ex Vietnam pilot as were most.  He learned to fly helicopters as a teen, worked to pay for his lessons and convinced his mother to let him learn.  The military snapped him up as soon as he was of age and the rest is history.  Tom let me fly one day but I struggled to keep the nose down and felt that the rotor blades were going to hit the canyon walls we were flying through.  Tom just laughed and like most of the Veteran Pilots....flew at tree top level.  Some days, if Tom wanted to explore a little....we'd fly around and just look for game or admire the countryside, even over the Bob Marshall Wilderness area which was a no-no even then.

I did have one little pilot who was quite short in stature and during the summer months wore short shorts and tennis shoes and nothing else.  One day he came to pick me up and the tiny clearing I found him in was hardly big enough for the helicopter!  On the way up, he clipped several branches and thinking back....I realize how dangerous this was!  He just laughed.

And then there was Mac, an older pilot who always flew the equipment.  He was amazing with a long line and his precision spotting equipment was unparalleled.  We become friends and I loaned him my car (didn't need it since I was flown to work every day).  Eventually, I bought a metal ice chest and the crew and I would fasten it to the last notch on the carousel with rope.  Mac would drop it off where we'd end our equipment layout and we could then have fresh food and cold drinks!  We'd pitch my little poncho/tent to make shade and we'd all eat, drink and be merry in the shade until I got the call to go troubleshoot, at which time the rest of the crew would nap until I returned.    When Mac came back with another load of equipment, we'd hook the cooler back on the last notch and repeat the process.

I've also never forgotten Ed.  This man was nearly starving to death when he was hired.   He showed up for work in cowboy boots with holes in the soles.   Can you imagine climbing in the mountains stomping in geophones in holey cowboy boots?   I could sense something wonderful in Ed and loaned him the money to buy proper hiking boots and food.  I only found out later that he was living in his truck but since we were paid per Diem for living, everything worked out for Ed.  He never forgot my loan and became the second in command as I trusted him implicitly.

What a life for a young person.  I only wish I had carried a camera back then.    I could go on with stories such as these but for now, let's go on with the report! 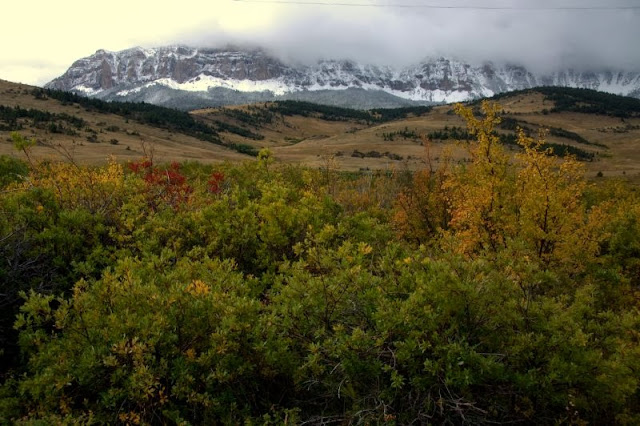 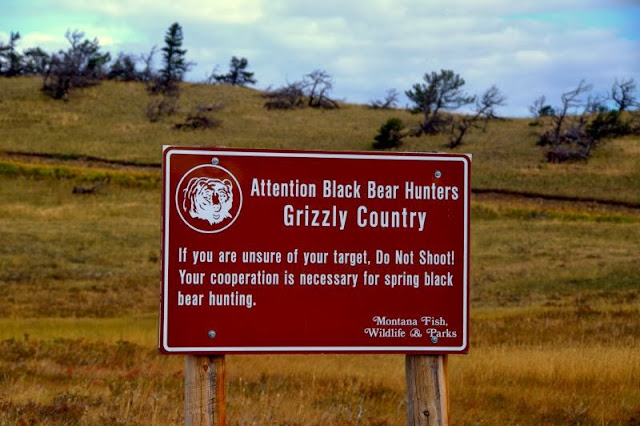 So are we likely to see a black bear?  Or a grizzly?  And this is where I worked.  Alone.  Except for a dog.  Lucky girl! 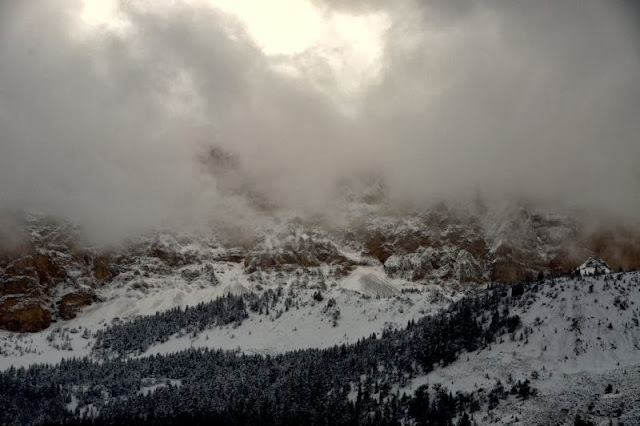 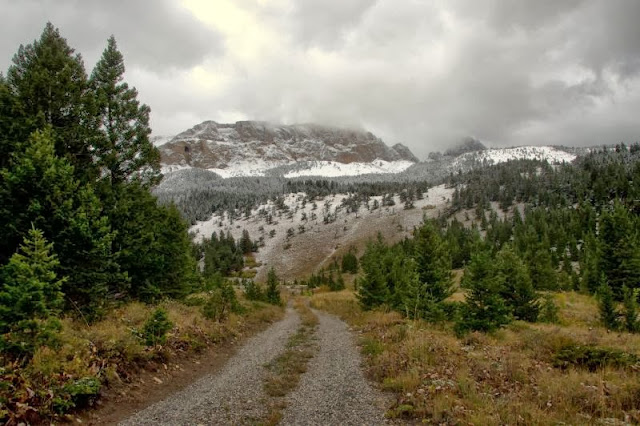 Into the heart of it all. 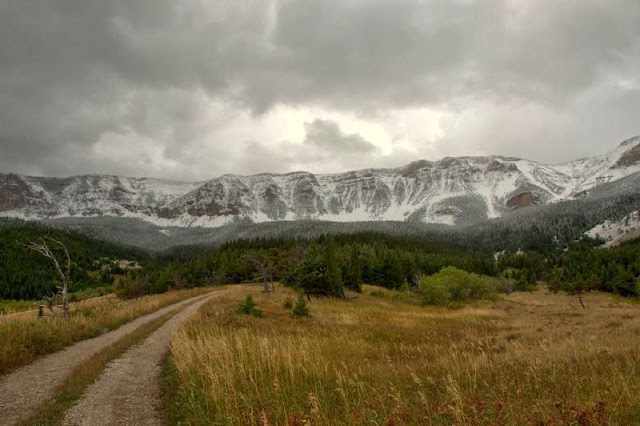 Do they call this "cave trail"?  It seems to go right toward the large cave.  I vaguely remember late night discussions from back in the day....about climbing up to the cave.  I wish I had. 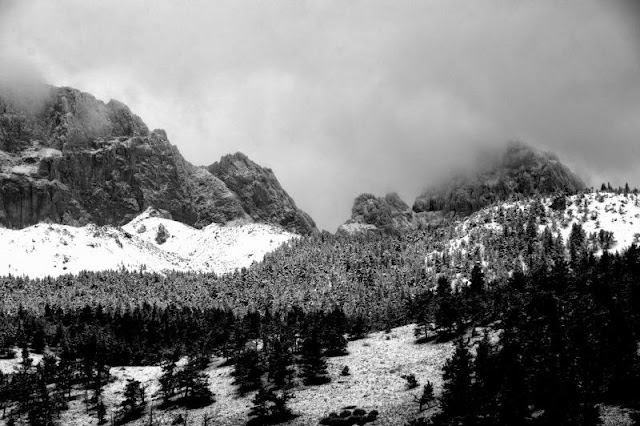 Monochromatica.  This is perhaps my favorite image of all time.  I will have this print framed at my next show, at the Wolf Point High School in December. 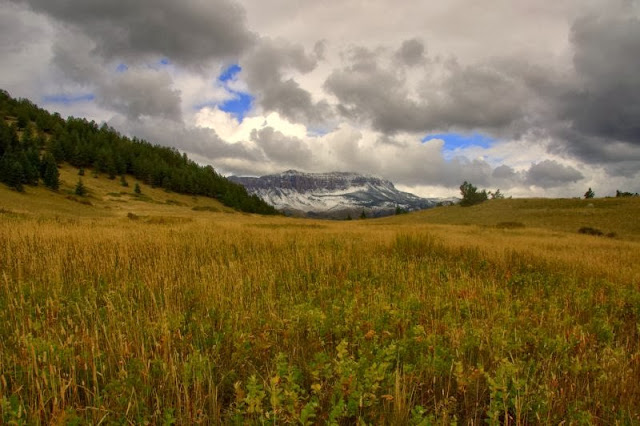 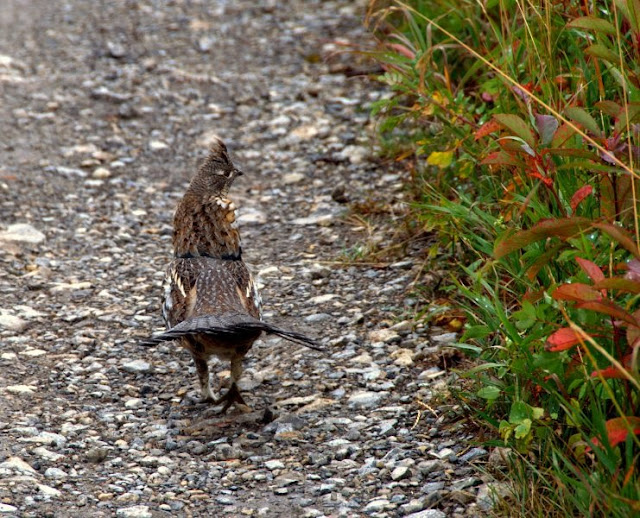 Mountain grouse struts his stuff.  (The only critter we saw in the Sun River Game Range.) 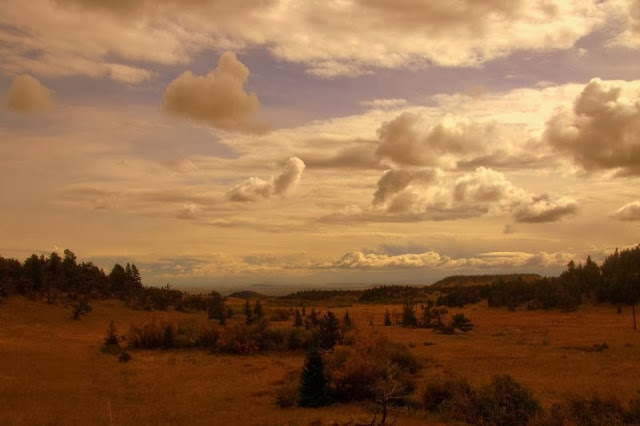 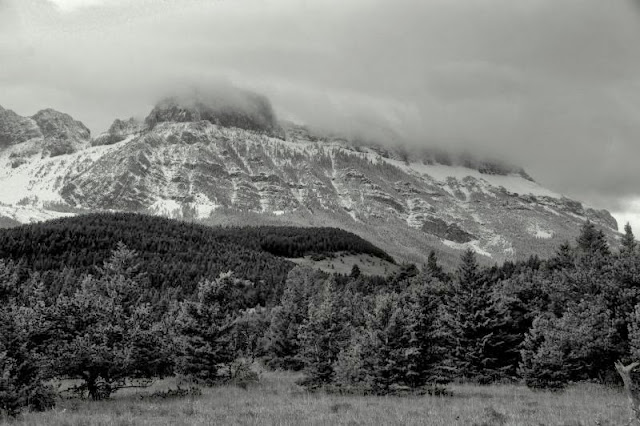 Textures.  (Another that I love.) 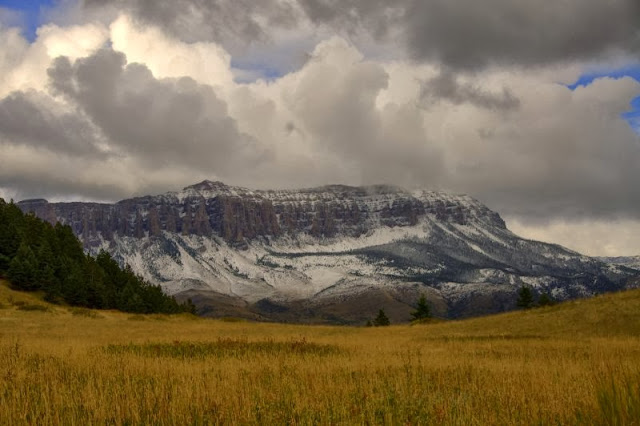 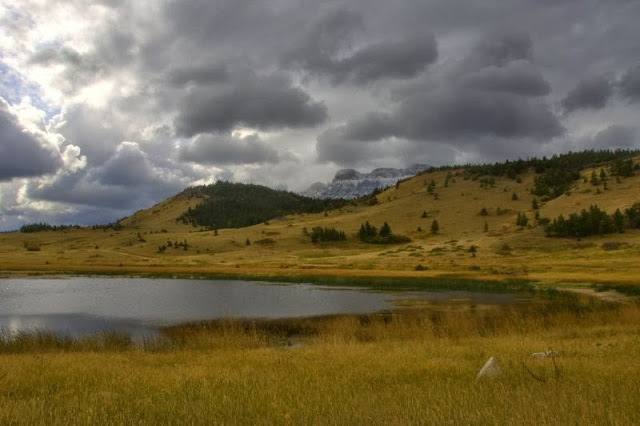